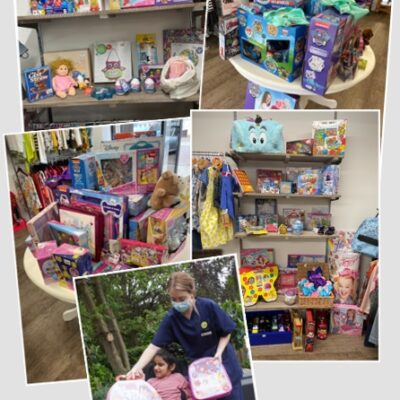 You never know quite what to expect when a tenant surrenders the lease to a commercial property and you have to clear the building before preparing it for the next letting.

When our Rob Huggett and Allan Gardiner recently took back the keys to an office vacated by a toy distributor, they discovered the entire ground floor filled with children’s toys – all in their original packaging. In these situations everything left behind by the tenant becomes the landlord’s property, but rather than bring in a contractor to clear the space they wanted to ensure the toys went to good use.

Rob said: “On entering the building, we discovered the entire ground floor filled with toys, all in their original packaging. The company had used the ground floor of the building as a showroom, and under the terms of the lease surrender all remaining stock reverts to the landlord.

“We would normally instruct someone to clear the building so that we can refurbish and re-let it. However, as there were so many toys in their original packaging we wanted to donate them to a suitable charity. As Helen & Douglas House is the local children’s hospice and operates retail outlets, we thought that they would be the ideal recipient for these toys as they could be either given to the hospice or sold in their charity shops. I am very glad they have gone to a good home and will be enjoyed by local children visiting the hospice and will raise money for a great local charity.”

We spoke to the lovely people at Helen & Douglas House, the world’s first children’s hospice, established in Oxford in 1982. They sent a van round and collected the toys, which are now on sale at eight of the charity’s shops in Oxfordshire as well as in their ebay shop. In addition, some of the craft materials went to the hospice for children to enjoy when visiting for respite stays, and some were included in gift packs issued to local families.

Richard Morgan from Helen & Douglas House said: “We are so grateful for this amazing donation of so many new toys, which will be enjoyed by children at the hospice and will raise hundreds if not thousands of pounds to help more local terminally ill children and their families. We were amazed how many toys there were when we went to pick them up and they are all brand new and in their original packaging. We would like to thank London and Scottish Property Investment Management for donating these wonderful new toys to our charity.”