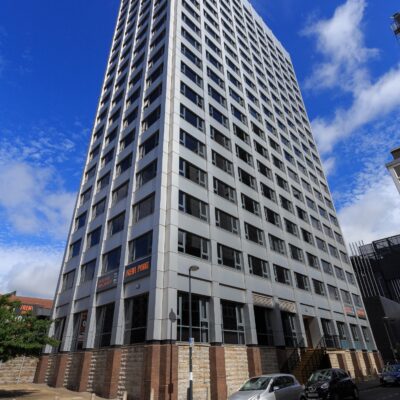 London & Scottish Property Investment Management (LSPIM) has completed on the sale of Arena Point, Leeds to Olympian Homes for £10.65 million on behalf of Regional REIT. The sale represents a 15.8% uplift against the 31 December 2020 valuation.

The 19-storey office block in Merrion Way was built in 1965 and will be demolished to make way for a 43-storey tower providing accommodation for 705 students.

The completed development will be the tallest purpose-built student accommodation (PBSA) building in Leeds. Other tall PBSA buildings in the city include the 23-storey Symons House and the 37-storey Altus House, which is immediately adjacent to Arena Point and also being delivered by Olympian Homes.

The sale represents the final part of LSPIM’s long-term business plan for the asset. It bought Arena Point and the adjacent two-storey casino and pub, known as the Podium Buildings, in March 2016 for £10.5 million on behalf of Reginal REIT. In July 2018 it sold the Podium Buildings site to Unite Students for £12.2 million for development into what is now the 16 and 27-storey towers at White Rose View. The final disposal of Arena Point has secured profits after all costs for the site of £9.3 million, producing a geared internal rate of return of 24.6%.

Stephen Inglis, CEO of LSPIM, said: “The disposal of Arena Point at nearly 16% above the 2020 year-end valuation concludes the successful long-term business plan for the site; having generated profits after all costs for the site in excess of £9.3 million. The successful final execution of this ambitious site plan is testament to the capabilities of the asset management team to add considerable value.

“We have a strong and growing pipeline of attractive new acquisition opportunities and intend to reinvest the proceeds of this sale into other mispriced office assets offering similar high returns in terms of yield and capital growth.”

This website uses cookies to improve your experience while you navigate through the website. Out of these, the cookies that are categorized as necessary are stored on your browser as they are essential for the working of basic functionalities of the website. We also use third-party cookies that help us analyze and understand how you use this website. These cookies will be stored in your browser only with your consent. You also have the option to opt-out of these cookies. But opting out of some of these cookies may affect your browsing experience.
Necessary Always Enabled

Any cookies that may not be particularly necessary for the website to function and is used specifically to collect user personal data via analytics, ads, other embedded contents are termed as non-necessary cookies. It is mandatory to procure user consent prior to running these cookies on your website.